South Australia’s newest national park is a game-changer for the Flinders. Learn why it’ll be so special to visit.

If you haven’t heard of Nilpena Ediacara National Park and have been dreaming of South Australia’s Flinders Ranges, our newest national park is the reason to start planning a visit there in 2022.

‘Nilpena’, as it is commonly referred, isn’t open to visitors just yet, but that’s because there is a lot of work being done behind the scenes to create a very unique visitor experience.

This national park is unlike any other in South Australia, possibly even the world, and will profile the state’s outback region in a whole new light.

Here’s why it needs to be added to your bucketlist for your 2022 adventures:

1. It has international historical significance

On the western fringes of the Flinders Ranges, about 500 km north of Adelaide, roughly 60,000 hectares of land has been set aside to become a national park.

And it’s also to celebrate a discovery that has already been attracting international attention. In fact, Nilpena is at the centre of a nomination currently being prepared to submit a bid for World Heritage listing for the Flinders Ranges in 2024.

National parks are protected areas for their significance relating to wildlife, natural features, landscapes and especially for our Aboriginal and cultural heritage.

We’re talking pre-dinosaurs or even pre-land plants. The likes of NASA have been backing the research at Nilpena for some time now, through the University of California, Riverside, to understand how animal life evolves on a planet.

A new 3-year research project has been funded to be undertaken at Nilpena from January next year that will validate computer algorithms that examine fossil evidence and match what has been discovered in Nilpena’s ancient seafloor. 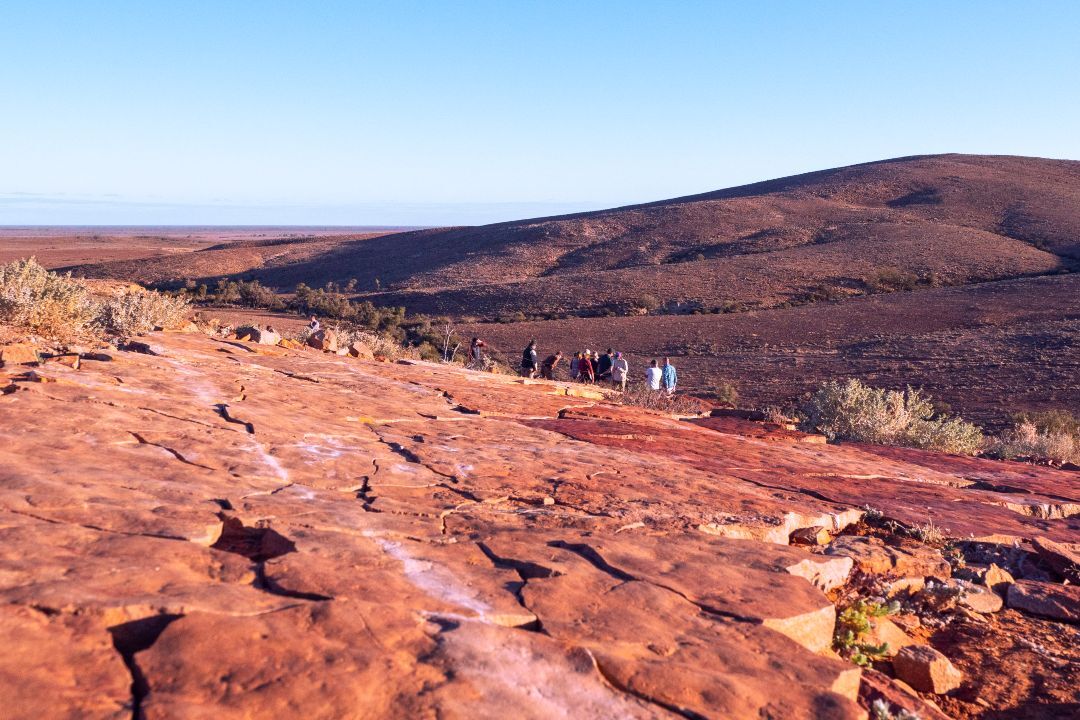 One of several fossil beds that have been unearthed in the hills of Nilpena Ediacara National Park.

Nilpena is an active research site and being able to observe and understand what is happening is all part of a new fossil experience that is being created in the national park.

During a future visit to the park, it’s very likely that you’ll be witnessing ground-breaking research before your eyes that will be of benefit to the world as we know it.

In the late 1960s, American folk singer Arlo Guthrie wrote a song titled ‘Alice’s Restaurant’ about being able to get anything you could ever want there to eat.

Fast forward to 2016, his song title was aptly used by leading palaeontologist Dr Mary Droser and her team from the University of California, Riverside to describe a significant fossil bed unearthed in the hills of the former Nilpena Pastoral Station – now the national park.

Mary describes this fossil bed from a palaeontologist’s point of view to have everything you could ever want in a specimen. 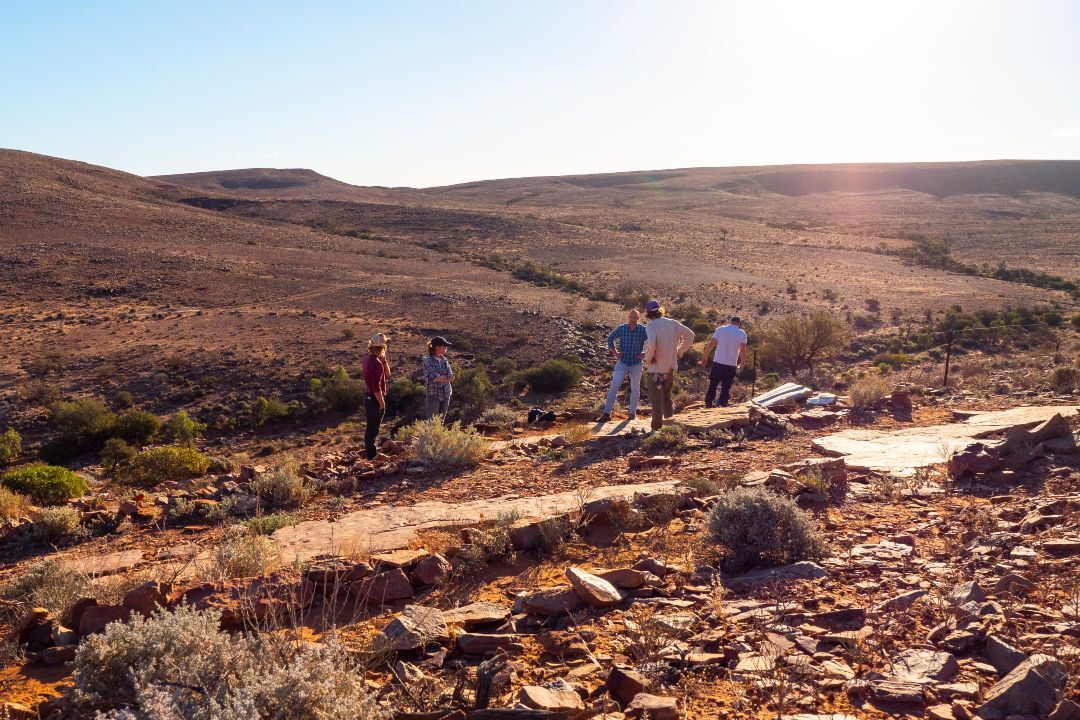 In Nilpena’s unassuming hills, Dr Mary Droser and her research team where visitors will be guided to see the fossil fields.

This fossil bed now known as ‘Alice’s Restaurant Bed’ is the focal point of the new fossil experience and will showcase first-hand and etched-in-time evidence of multicellular animal life that lived on earth 560 million to 542 million years ago.

More than 40 species have been recorded at Nilpena, with others first discovered in the nearby Ediacaran Hills, which is also in the national park, back in the 1940s by local geologist Reg Sprigg.

His discovery was so significant that a fossil was named in his honour (Spriggina) and has become the South Australian fossil emblem. The Ediacaran geological period of time was named after the location of this discovery. 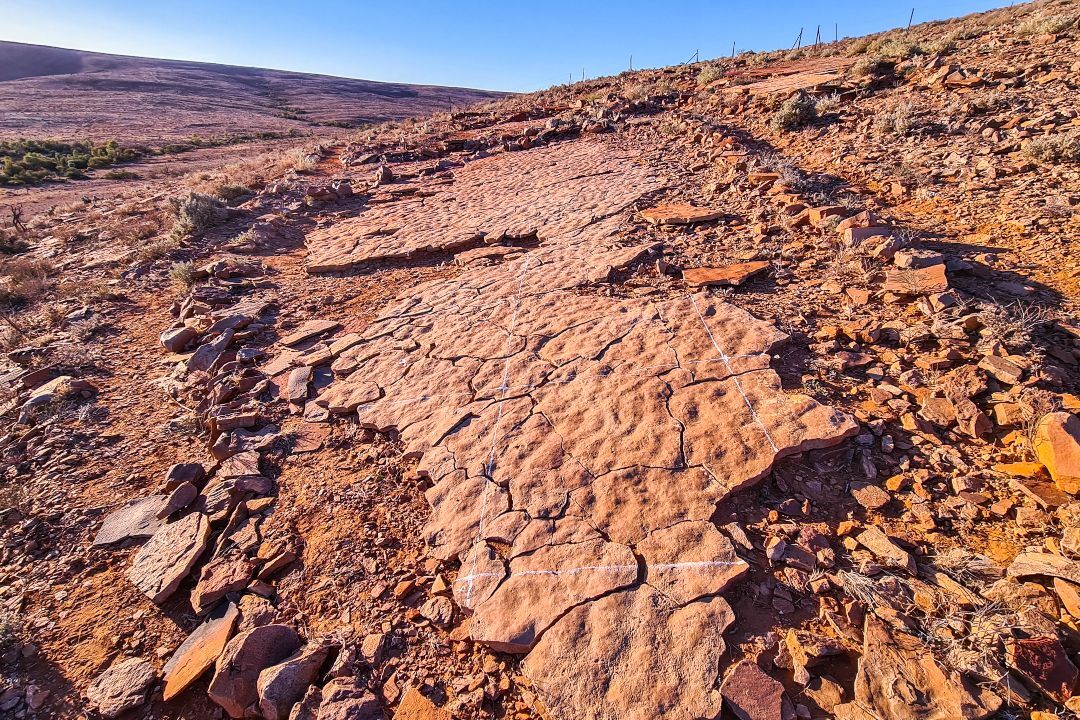 Unearthed in 2016, Alice’s Restaurant Bed is Nilpena’s most significant fossil specimen and will be the focal point of a new experience at the national park.

4. It has several unique – and famously named – specimens

When the national park opens in 2022, you’ll not only be able to see Spriggina specimens, but other unique ones as well.

There’s the Attenborities janeae, named after Sir Richard Attenborough who has been to Nilpena and documented about first life at Nilpena a few years ago, and Obamus coronatus, named after President Barack Obama for his commitment to science research.

Nilpena Ediacara National Park is a new destination in the Flinders Ranges and one that is very much untouched.

The leaseholders of the former pastoral station took careful consideration to protect the surrounding landscape that now forms the national park.

Evidence of the Adnyamathanha people, the Traditional Owners of the land, exists in the form of ash and charcoal middens around Nilpena’s permanent springs.

In what seems dry and rugged outback, seeing water flowing is quite captivating.

The park’s unique landscape is probably why film-makers continue to use Nilpena as a film set – but we’ll discuss the landscape in more detail shortly. 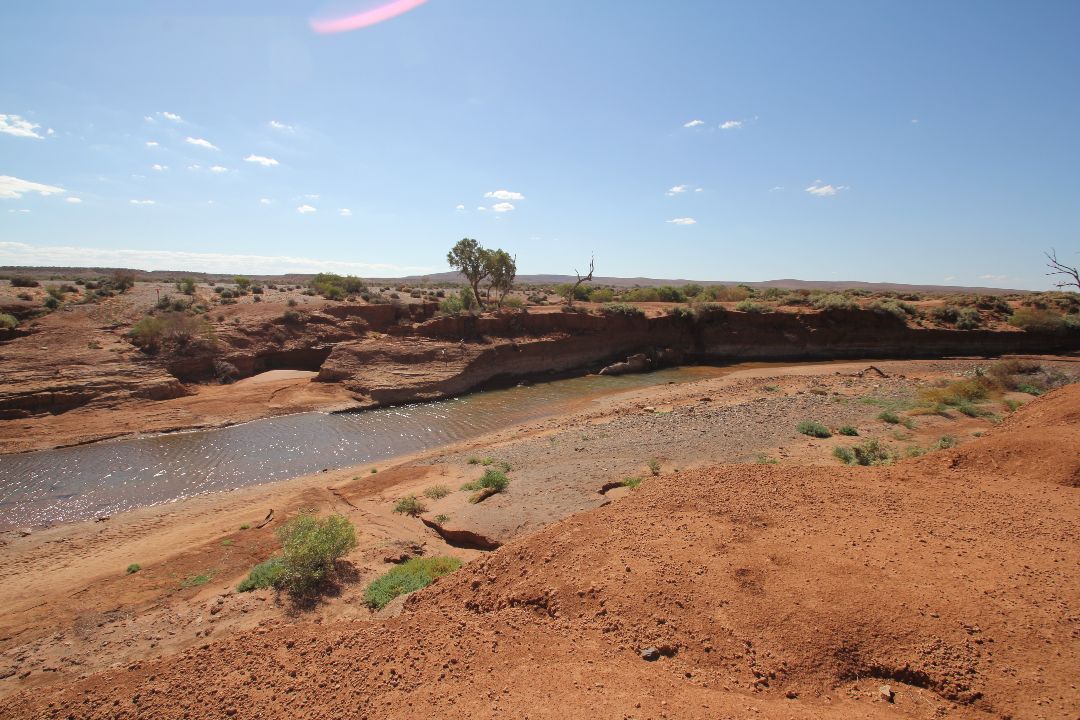 The permanent springs that flow through the national park were where ash and charcoal middens of the Adnyamathanha people are still evident.

When can I visit, and how?

With the anticipated opening of the national park in the first half of 2022, there is visible work underway with a stone gateway already constructed and can be seen from the Outback Highway, 30 minutes north of Parachilna.

The gateway is the welcome point for all visitors to enter the park and has ample parking. It’s also a shared access point for the residents of the Nilpena homestead that lies adjacent to the national park.

Gaining access to the park feels like a privilege but in fact, once you understand the importance of the site and what it contains, you quickly realise it’s a necessary measure.

This is a site of huge international significance and to ensure it’s protected, you’ll only be able to visit by booking a guided tour.

There will be no overnight facilities or areas to freely undertake recreation. From the gateway, a 14 km journey as part of the guided tour will lead you to a new visitor precinct that is currently under construction. 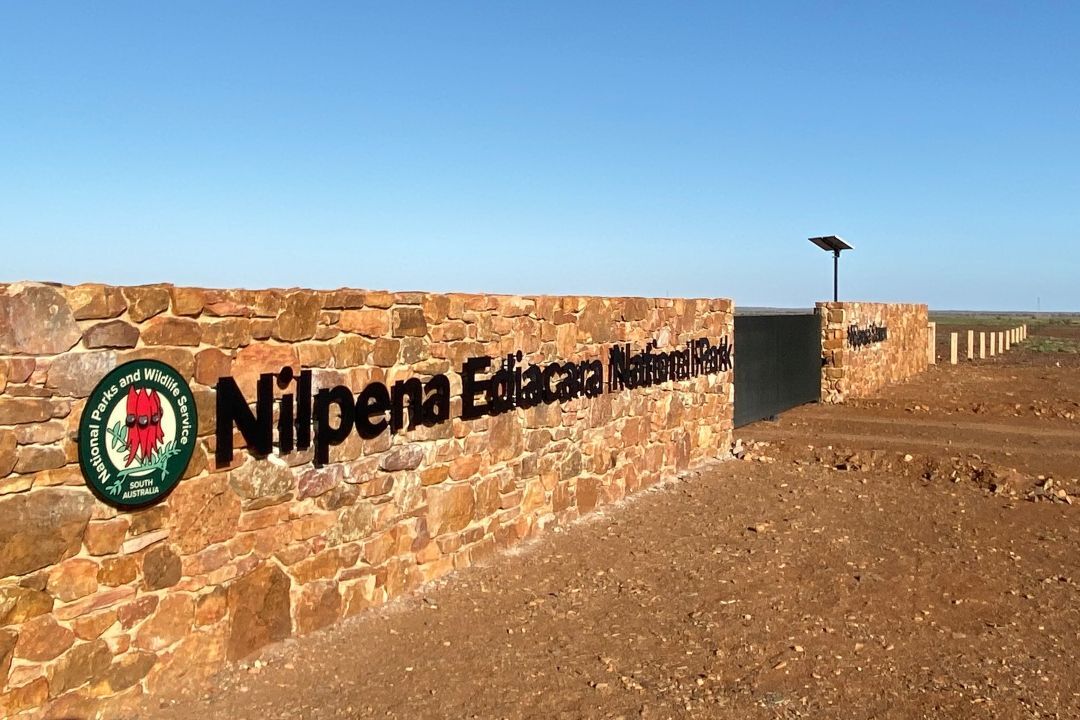 The newly constructed Nilpena Gateway where visitors will meet a guide for the journey to the visitor precinct and fossil field site.

The tour will also include a visit to Nilpena’s unassuming hills where a Class 2, all-accessible trail has been developed amongst the fossil fields.

It’s here where you’ll see where earliest life was discovered. The trail includes nodes of excavated fossil beds, each with a unique story to be told.

The surrounding landscape is quite spectacular and provides a different perspective of the Flinders Ranges.

Rolling hills frame the distant landscape and at dusk, you’ll be able to capture panoramic photos of the ranges in all their purple hue glory. 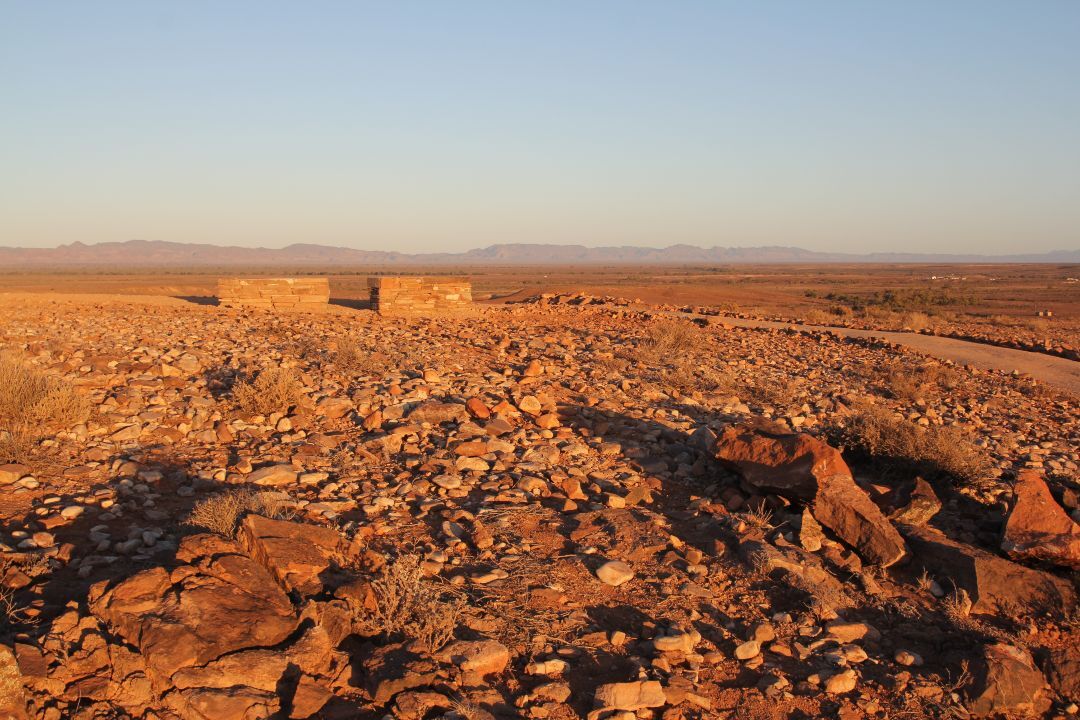 The entry point of the fossil field site with views to the northern Flinders Ranges.

What exactly is in the new visitor precinct?

The new visitor precinct itself is made up of three heritage buildings of the former pastoral station.

When the park opens for visitors, the old Blacksmith’s Shop will have been the first building to be repurposed – as a state-of-the-art interpretation centre. An artist’s impression of the repurposed Blacksmith’s Shop at the national park’s visitor precinct.

It’s being created by a specialist project team: there’s everyone from stonemasons to audio-visual technicians to furniture craftsman and finally palaeontologists.

Together they are creating what will be a one-of-kind fossil experience centred on Alice’s Restaurant Bed, which requires the careful installation of its 200 or so pieces.

Curated lighting will provide the best possible viewing conditions to see an array of fossils and a specially designed plinth will support the specimen.

Different thicknesses of the excavated fossil pieces will be levelled before it’s grouted back into one solid artefact.

This will be an all-accessible, visitor experience allowing everyone of all mobility types to view fossils up-close.

The adjacent shearer’s quarters is currently accommodation for researchers that work on site. Plans for the former woolshed, opposite the Blacksmith’s Shop, presents a unique opportunity for an event and function space in the future. 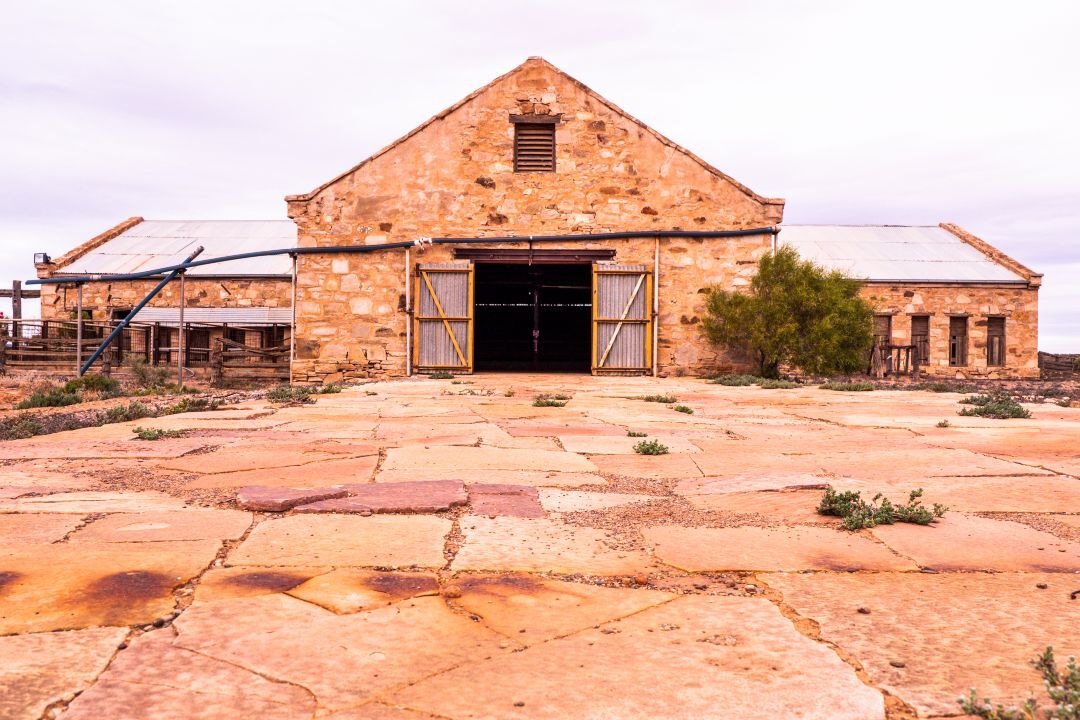 Nilpena’s historic woolshed where the story of the most significant discovery began.

To know more, you’ll need to visit to get the lowdown. But in the meantime, visit the website touncover more about Nilpena.