Keep your eyes peeled for the thousands of migratory shorebirds flocking to Adelaide’s Gulf St Vincent this spring.

If you’re around Adelaide at this time of year, make sure you look up to the sky. It definitely won’t be Superman, but chances are it will be a shorebird.

Thousands of migratory shorebirds flock to Gulf St Vincent in the north-west of Adelaide in spring as part of their annual southern migration.

The migratory shorebird lifestyle is one of extensive travel and rest, between food rich habitats for shelter and breeding.

Migratory shorebirds – also known as waders – can travel more than 25,000 kilometres yearly, during a lifespan that can exceed 20 years.

Our local migratory shorebirds travel to opposite ends of the planet – from the northern Arctic breeding grounds, along the East Asian-Australasian Flyway, to our southern Australian shores, and then back again. But why?

Gulf St Vincent is an important summer destination for many migratory shorebirds. The 60 km stretch of coast north-west of Adelaide, from the Barker Inlet to the township of Port Parham, contains important habitat for shorebirds to feed and roost.

This stretch of coast sits parallel to Port Wakefield Road, and is being created as the Adelaide International Bird Sanctuary. Many of the migratory shorebirds depend on Adelaide’s north-west coastline to fatten up for the long journey back to their arctic breeding grounds. What makes this coast so attractive is its rich mudflats and saltmarshes, open space, shelter and safety.

Bird is the word this spring

Gulf St Vincent hosts around 27,000 shorebirds, particularly during the warmer months, including up to 42 migrant species. 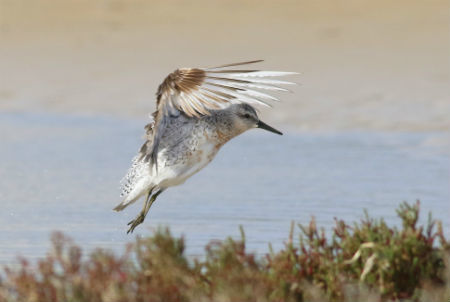 Help celebrate the arrival of these migratory shorebirds at the Adelaide Shorebird Festival on Sunday 30 October.

The Festival is a free family event being held next to the St Kilda Playground between 10 am and 4 pm with birdwatching tours, tram rides and Kaurna activities.

While the shorebirds gorge on mudflats and saltmarsh, you can enjoy the local food at the Festival with celebrity MC for the day ‘Cosi’ from Channel 9’s South Aussie with Cosi.