It might be rare to spot a pygmy blue whale in the wild, but it’s worth brushing up on your knowledge just in case.

The largest animal on earth – the blue whale – whose tongue alone can weigh as much as an elephant, can be seasonally found off the coast of South Australia.

The smaller but still very large pygmy blue whale is a subspecies of blue whale that visits SA’s waters on their migration route between the Subtropical Convergence oceanic region along the southern and western Australian coasts to Indonesia.

While sightings of these magnificent animals are rare, it’s this time of year during the warmer months that pygmy blue whales feed on krill at the Duntroon Basin and Bonney upwelling locations near SA’s Eastern Spencer Gulf,Southern Spencer Gulf, Lower Yorke Peninsula and Upper Gulf St Vincent marine parks.

The Bonney upwelling brings nutrient rich warm water that supports a smorgasbord of krill for the whales and other marine creatures to feast on.

Whale of a tale

In mid-October a pygmy blue whale was sadly stranded at the picturesque remote beach at Point Davenport Conservation Park, on the south coast of Yorke Peninsula.

The whale was found in an intertidal section of the Davenport Creek Sanctuary Zone in the Lower Yorke Peninsula Marine Park – a nationally important wetland that is more well-known as a nursery for fish than it is for sightings of blue whales. 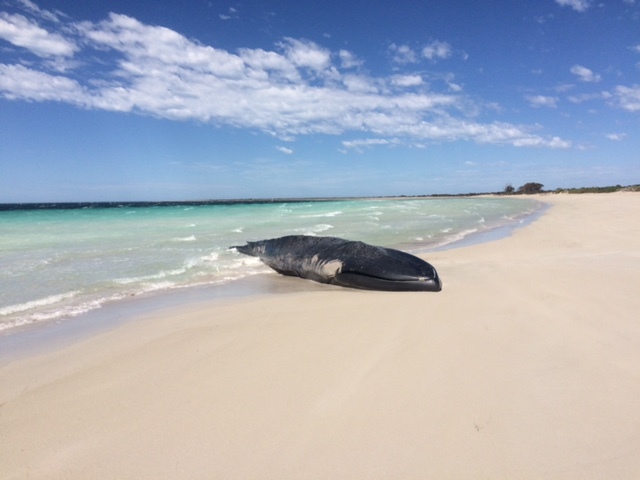 The nearly 15-metre whale was emaciated with extensive blistering, and was clearly sick, beyond rescue. Local staff did all they could but unfortunately the animal passed away a couple of days later.

The SA Museum undertook a necropsy onsite and recovered the skeleton of the whale for research and educational purposes.

Uncovering the mysteries of SA’s seas

The unfortunate stranding of the pygmy blue whale brings to the surface the array of spectacular marine life under SA’s waters.

Like pygmy blue whales, many mysterious animals live in our coastal and oceanic waters that are rarely spotted by humans. Stranding of these animals gives us an opportunity to learn more about the secret life of these creatures.

Stranded, beached… but why?

There is still so much to learn about the reasons why whales and other marine animals become stranded.

The information gained through the Yorke Peninsula incident can help experts around the country to better understand the biology of the majestic blue whale.

Check out the footage below captured at Point Davenport Conservation Park, which shows rescue staff attending to the stranded pygmy blue whale.

If you find a stranded whale or any other marine animal in distresscontact the Department of Environment, Water and Natural Resourceson 0427 556 676. Do not approach the animal – for their safety and your own.

Interested in seeing a whale for yourself? See our top spots forwhale watching.