Your guide to identifying animal poo

Gone bush­walk­ing and won­dered ​‘whose poo is that?’ Brush up on your ani­mal scat knowl­edge with these gross facts.

If you’re not too squea­mish, you can learn a lot from ani­mal poo.

Wild ani­mal poo is known as scat, and it can be very use­ful in work­ing out what species are near­by because each type of scat is different.

Of course, some scat will begin to dry out and look dif­fer­ent with age, so if you real­ly know your busi­ness, you’ll be able to tell how long ago the ani­mal was there. Koala poo, for exam­ple, goes from a moist green to some­thing that looks more like dried out grass pellets.

How­ev­er, poo is poo and no-one likes to have it tracked back into the car or tent when you’re vis­it­ing a nation­al park, so it’s always a good idea to watch where you step.

Once you’ve dodged that bul­let, take a clos­er look and see if you can pick which of these ani­mals it belongs to:

Koala poo is about the size and shape of an olive, and it’s usu­al­ly a dark green­ish colour. It’s prob­a­bly one of the least offen­sive types of poo, because it smells strong­ly of eucalyptus.

Koalas pro­duce these lit­tle pel­lets 24 hours a day, even when they’re asleep, and they pro­duce a lot of them – up to 360 a day. 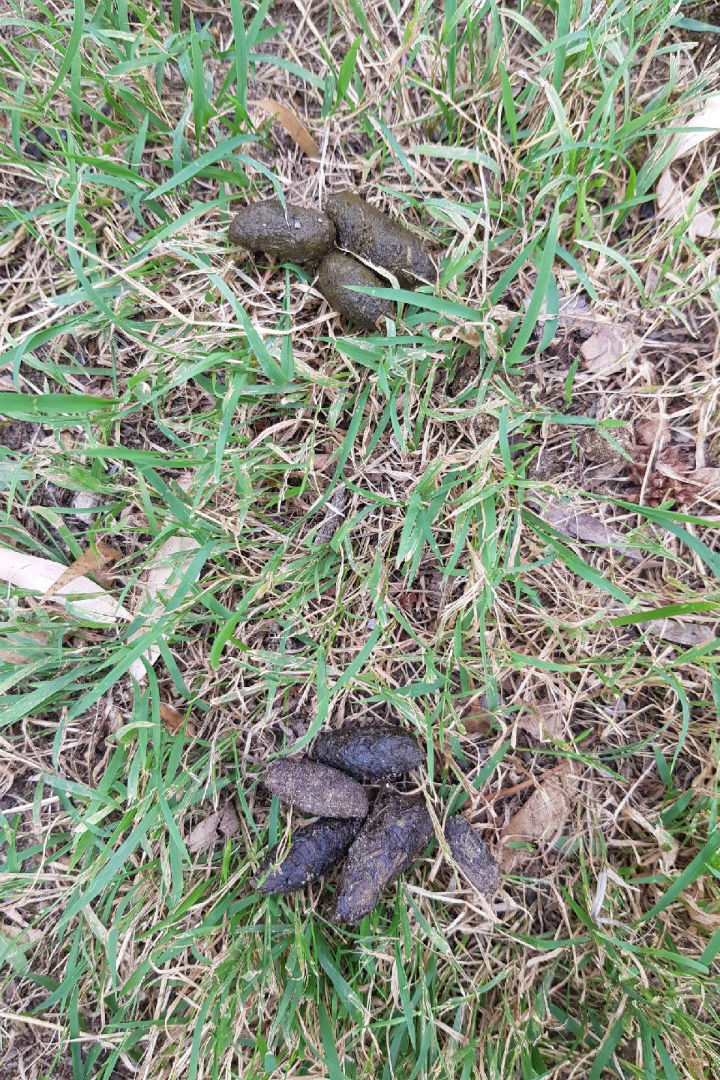 Macro­p­od scat is usu­al­ly shaped like uneven lit­tle balls and can be about 1 – 3cm across depend­ing on the size of the kan­ga­roo. You’ll often find it in small piles, or even in lines.

It’s black on the out­side, but the inside is dry and yel­low­ish-green, so you can eas­i­ly see that the roo’s main food is grass and leaves.

At first glance, bandi­coots might look a bit like intro­duced rats, but their scat is noth­ing like rat poo. They eat a lot of insects, so their poo is full of the indi­gestible parts like bee­tle cas­ings, as well as bits of grass and dirt. The pel­lets are 25 – 50 mm long with a smooth, mud­dy surface.

Bandi­coots are often known as the lit­tle gar­den­ers of the bush, doing a lot of dig­ging as they turn over the soil and leaf lit­ter look­ing for tasty morsels, so you’ll often see their scat near their diggings.

This varies with the species of pos­sum and what they’re eat­ing at the time.

Brush­tail pos­sum scat is a sim­i­lar shape to koala poo, but a lit­tle small­er, and it can range from green­ish brown to dark brown or black, depend­ing whether they’re help­ing them­selves to gar­den fruit trees or eat­ing leaves.

Ring-tail pos­sum poo is about 1 cm long and a dark brown to black colour, and can be best described as an uneven pel­let that looks a lot like an olive pit. 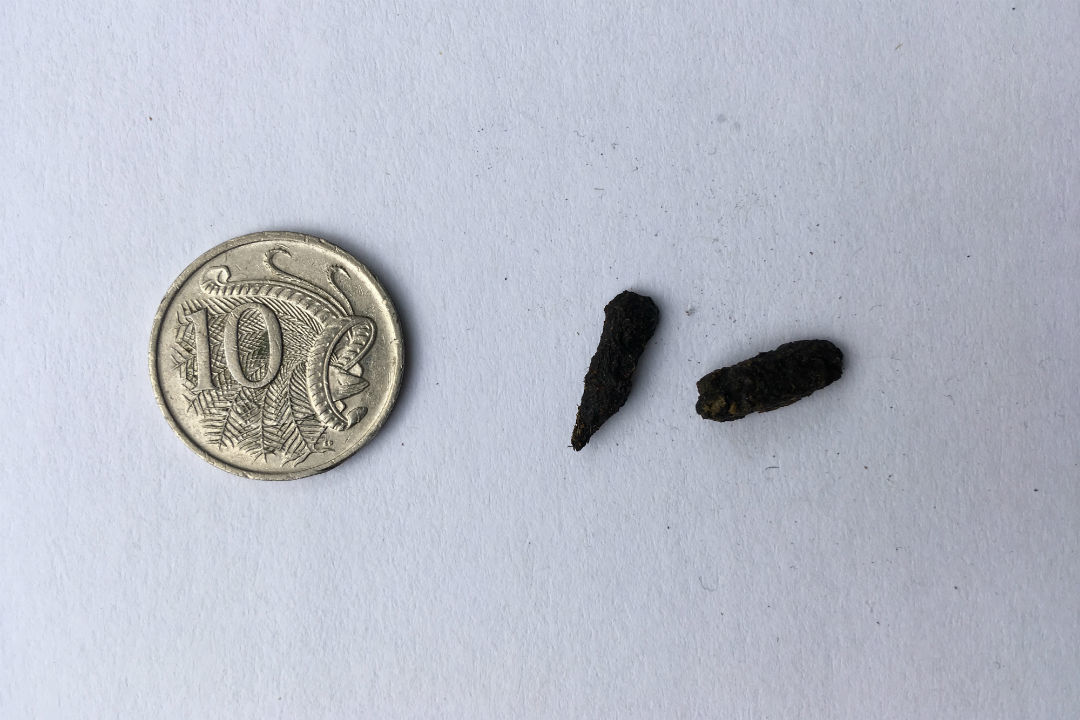 You’ll nev­er mis­take a wom­bat poo for any oth­er animal’s, because wom­bats are famous for doing square poo.

This Con­ver­sa­tion sto­ry has a great expla­na­tion of how and why this hap­pens. Long sto­ry short, it’s all to do with their very slow diges­tive process.

If you have micro­bats liv­ing in your roof or chim­ney, you’re like­ly to see their poo lying around. It’s very sim­i­lar to mouse poo in size, shape and colour, but the con­sis­ten­cy is much drier.

If you’re look­ing at a lit­tle black poo and won­der­ing whether it came from a bat or a mouse, put on rub­ber gloves and roll one between your fin­ger and thumb. Mouse poo will squash, while bat scat crumbles. 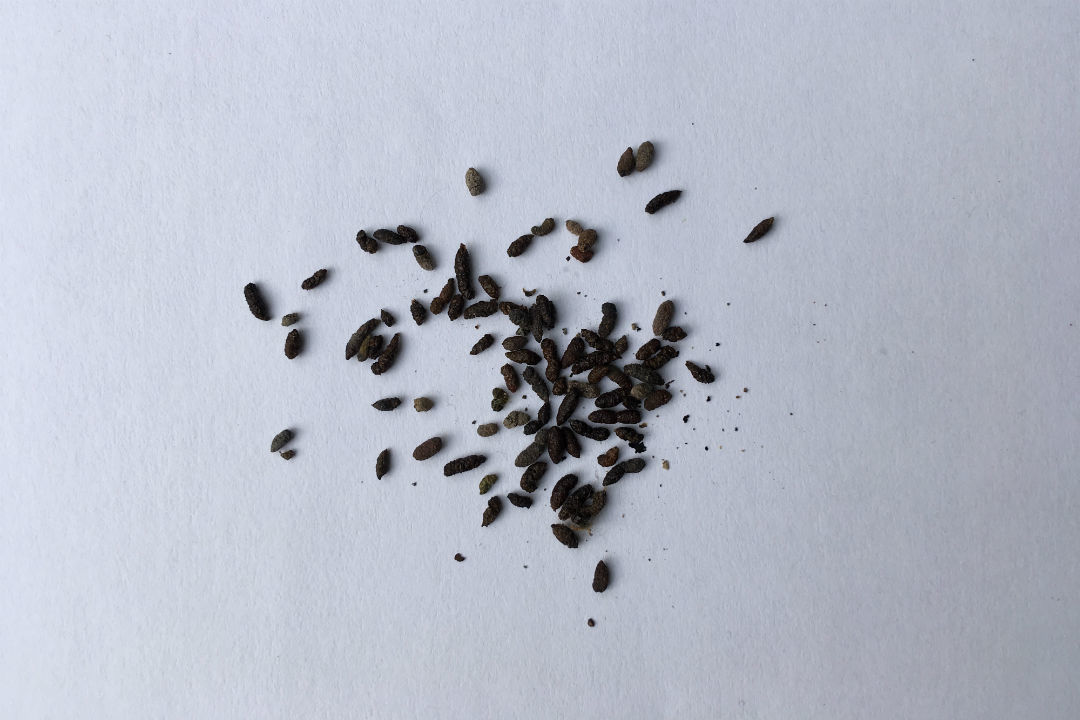 As you might imag­ine, emu poo is pret­ty big. All in all, it’s a bless­ing that they are flight­less, because an emu poo hit­ting a wind­screen could be disastrous.

How­ev­er, emu poo can vary quite sig­nif­i­cant­ly in appear­ance, depend­ing on what they’re eating.

For exam­ple, if you’re in Mount Remark­able Nation­al Park in the south­ern Flinders Ranges, you’re like­ly to see some­thing that looks a bit like a cow­pat – wet, dark green and rough­ly the size of a men’s size 6 boot print.

Din­goes are wild dogs and hybridise eas­i­ly with their domes­tic cousins, so it’s not sur­pris­ing that din­go scat is quite sim­i­lar to medi­um-sized dog poo, in both appear­ance and smell.

The dog fence runs across the top part of South Aus­tralia, and is intend­ed to keep din­goes out of the pas­toral zone, so you shouldn’t see din­go scat south of the fence very often. 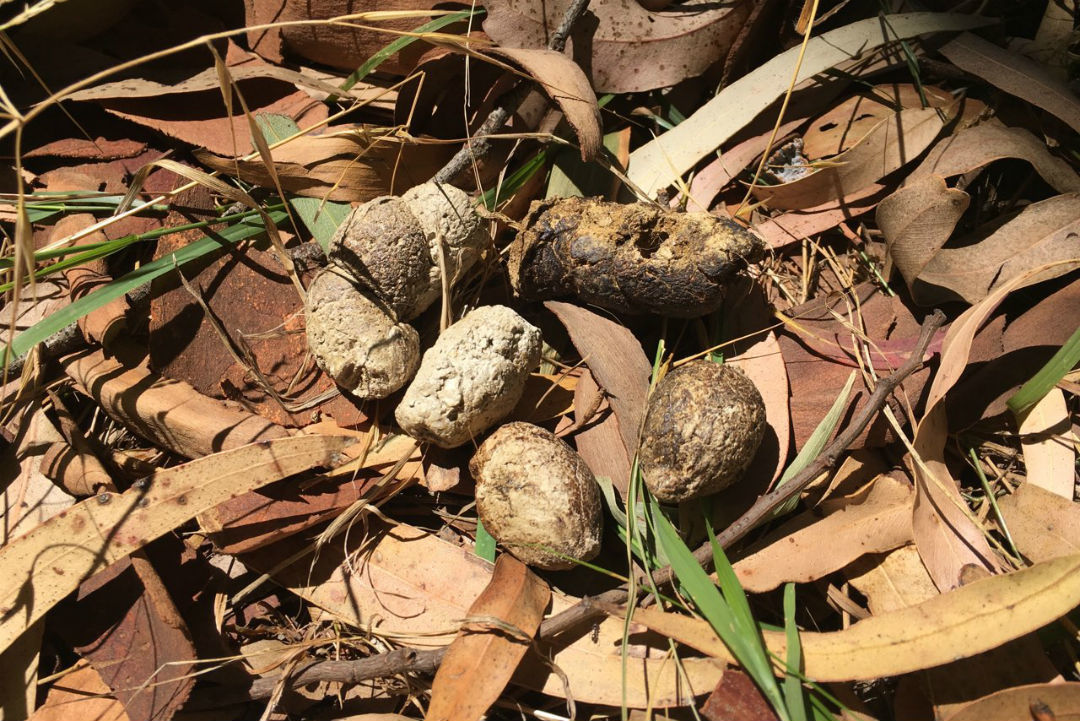 It’s an unfor­tu­nate fact that fox­es are com­mon across South Aus­tralia, even in the sub­urbs. Fox scat looks more like cat poo than dog poo. It is dark brown to black and about the length and width of a thumb, and it can look a bit dry and stringy with a pointy end.

Some birds of prey birds like owls cough up a pel­let made of all the things they can’t digest a few hours after eat­ing. Small­er birds like cur­ra­wongs and mag­pies may also pro­duce these pellets.

They can include things like fur, hair and bones from small mam­mals and rep­tiles, wings and exoskele­tons from bee­tles and oth­er insects, and seeds.

The size of the pel­let depends on the size of the bird. A mag­pie pel­let is about 3cm long, but a larg­er bird like a barn owl can pro­duce one that’s about 6 or 7cm long. 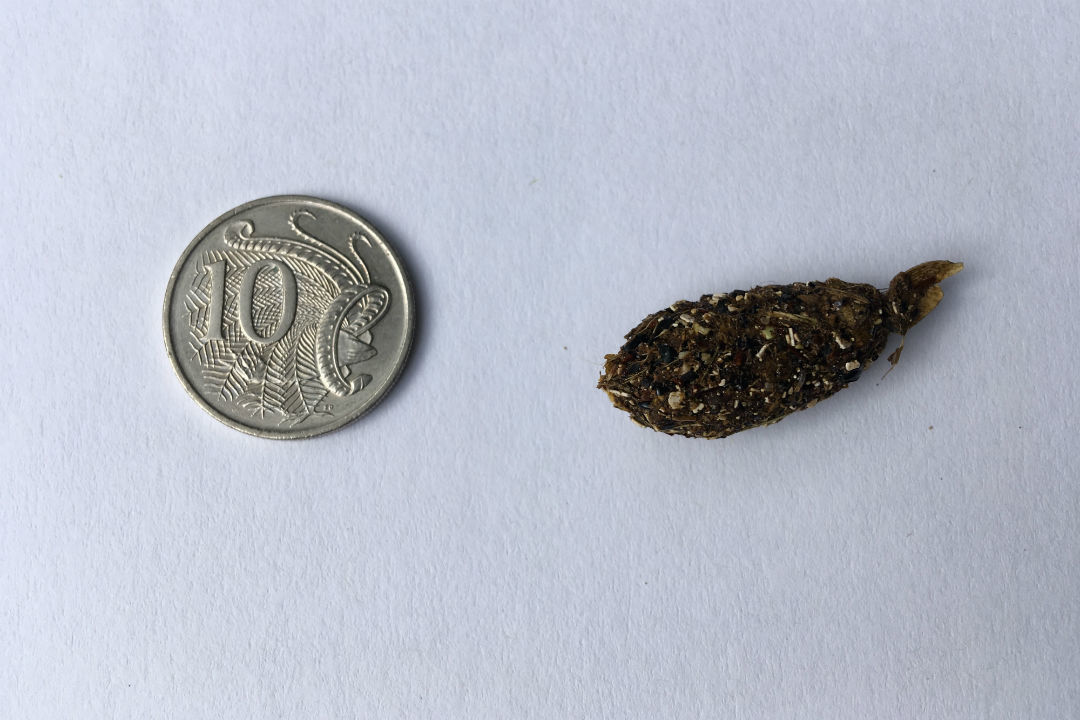 This sto­ry is about whose poo you might find in South Aus­trali­a’s nation­al parks. If you come across any mys­te­ri­ous scat in your own back­yard, you can do a Google search to find out who it might belong to.

For more insights into the crea­tures that call South Aus­tralia home, check out our library ofAni­mal Encoun­terssto­ries. You might be inter­est­ed to learn about some of ourwack­i­est-look­ing marine crea­tures,or some of oursmall­est native species.

This sto­ry was orig­i­nal­ly post­ed in Feb­ru­ary 2018 but has been reg­u­lar­ly repost­ed because it’s the most pop­u­lar sto­ry in Good Liv­ing’s history!